We are a contemporary theater group formed in 2005 consisting of two artistic directors: Terje Ranes and Monica Borg Fure. We focus on contemporary issues and problems and through art tell the important stories that need to be heard. We do not want to be either educational or moralistic, but a strong and critical voice in society. We aim to tell stories from real life through the artistic universe. We work with new drama and a desire to promote this field and encourage more people to cooperate with living playwrights and their texts.

Go to our plays and productions here

is a graduate of Theatre X, and has worked as a freelance actor in film and television, institutional theaters such as Teater Ibsen and Det Åpne Teater, as well as independent groups like Fabula Rasa and Grenland Friteater. Monica was last seen in Blendwerks "The Song Of Ali-ette" at Oslo Nye Teaterkjelleren and her own play "Living on Code 6", premiering at Oslo Nye Caféscenen.
Click here for full CV (in Norwegian - please contact us for english translation)

studied as an actor at the National College of Dramatic Art in Oslo, and has worked for many institutional theatres throughout Norway and independent groups like Fabula Rasa etc. Terje was last seen in “Tuba Atlantic” the Norwegian Oscar nominated short film, and in February of 2013 he is performing in Blodig Alvor by Yasmina Reza at Haugesund Teater directed by Harry Guttormsen .
Click here for full CV (in Norwegian - please contact us for english translation) 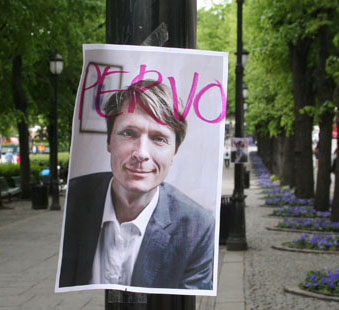 What is it to be a silent witness to sexual harassment, assault and bullying? Is it possible to live with not having spoken up against it? Very difficult topics are placed on the agenda when Blendwerk and Hilde Hanna Buvik co-operates on this new play with Oslo Nye Teater.

Bullying and sexual violence kept hidden, shame, living a life lie, psychological trauma and forgiveness. Contemporary, painful and riddled with taboos - Anaconda is Australian Sarah Doyle's prize winning play from 2012, and it is far from easygoing. 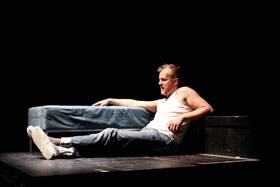 Anaconda is inspired by the actual events at a prominent and exclusive boarding school in Sydney, Australia, in 2000. Two boys are over a period of weeks and months exposed to cruel assaults from fellow students in front of several witnesses who does nothing to help. Springing from these horrific events comes Sarah Doyle's compelling story of how to pick up the pieces after being part of such cruel actions. Her characters are haunted by their past and confronted with their darkest secrets. Can we be reunited, can we forgive or be forgiven?

The norwegian premiere of Doyle's controversial play is a co-production between Oslo Nye Teater, the theatregroup Blendwerk Teater and Hilde Hannah Buvik. It was Hilde who first noticed Anaconda at Hollywood Fringe Festival in 2012 and began the work of getting the rights to perform the play in Norway, and even translated the play into Norwegian herself. 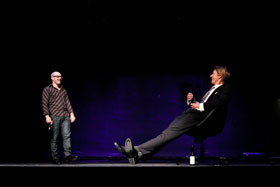 "In Anaconda I found a modern contemporary story based on actual events, depicting 'the big questions'. I wanted to present these serious issues to a norwegian audience", Buvik says.

Sarah Doyle herself is very pleased that Hilde Hannah Buvik and Blendwerk Teater is producing the play for the norwegian stage and hopes the debate will continue to engage audiences there as it has in the USA and Australia.

Back to the top 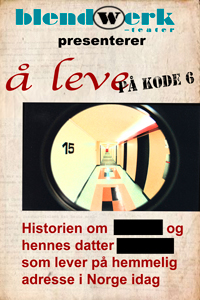 We call it noise; domestic violence, family trouble. Yes, it is noisy. Violence is often loud. Bruises and wounds. Injuries. Some heal, others don’t. And some die. Code 6 is the strictest form of secret address we have in Norway, and it is granted only when your life is in danger. A life on Code 6 means that your personal information is classified and that only a few trusted security people know your identity and your address. Experience shows however that sometimes this does not provide adequate protection.

Back to the top 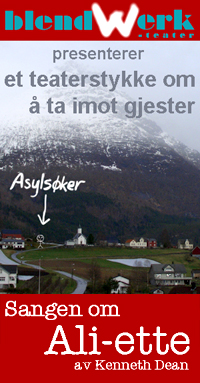 We meet the well-meaning Jostein Bergtagen, who after a two-month study travels and lectures on children's asylum conditions in Norway. With him is Dushko, "a genuine refugee" (that Jostein found through the social services), whom Jostein firmly believes comes from Bulgaria. Or Serbia ... Well, whatever…

His nemesis is the Chief Bureaucrat and Über-Stickler for Procedures, Fridtjof Overbekken from the UDI (the Norwegian directorate for foreign nationals seeking asylum) With a childlike defiance and joy he makes even the simplest reasoning unintelligible. We meet him in the capable hands of TV hostess Margaret to whom he is trying to clarify some misunderstandings around the Norwegian asylum policy ... Does this sound familiar?

Well, a lot has happened in the Norwegian asylum debate since we got the script and started rehearsals. We have had the Maria Amelie affair with a subsequent media debate that resembles scenes and characters from our play to such a degree that we have had to emphasize that this time it's reality imitating art and not vice versa.

Joining us on stage is the Balkan orchestra Rakija band in case it all gets too silly.

Teddy is the deputy director of the firm.
Molly cleans up after the company party.
Both have something the other wants desperately ...

In Safari, Maria Tryti Vennerød starts out from the poor balance of power in the world. The play pictures a disturbing and macabre battle played out in a zoo after closing time, and touches on global conflicts such as north vs. south, poor vs. rich, woman vs. man.

About a man, a young girl and a paternity test.

Celina Beatrice regrettably has to sacrifice her hen.

Performed by:
Monica Borg Fure - Celina Beatrice
Directed by: Mads H. Jørgensen
Set design, light- and sounddesign by: Mads H. Jørgensen
The Crocodile was also part of the production 3 x 1
- three one act plays by Maria Tryti Vennerød,
which opened at Det Åpne Teater in Oslo on January 23rd of 2008.